Notice: get_the_excerpt was called with an argument that is deprecated since version 2.3 with no alternative available. in /var/sites/e/enteringveganterritory.co.uk/public_html/wp-includes/functions.php on line 3739

This is my translation of Marie Laforêt’s recipe for ‘Rillettes Marines‘ in her fabulous French cookbook, Vegan (with my adaptations in brackets). The yaki nori (that’s the seaweed sheets that are used to make sushi) lends a flavour of the sea. Delicious on toast or crackers, or try it in sandwiches with sliced cucumber. 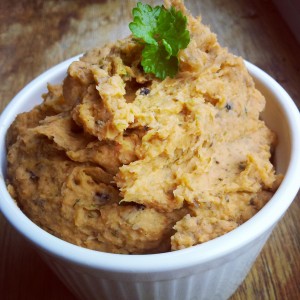 (I used half a jar of artichoke hearts in oil, drained – and left out the olive oil)

A few drops of liquid smoke

(I left this out and it was still delicious)

(I also added a touch of cayenne pepper)

1. Finely chop the artichoke hearts, then heat them in the olive oil for 5 minutes, over a medium heat. Salt, pepper and add a few drops of liquid smoke. Set aside.

(As I was using artichoke hearts preserved in oil, I skipped this step – I just drained them, reserving the oil, and chopped them finely).

2. Blend the beans with the mustard and the oil. Add the cream, the yaki nori, the tomato puree and the herbs, and blend.

(I used a handheld blender – I used the oil I’d drained from the artichoke hearts, and left out the soya cream).

3.  In a large bowl, mix this with the artichoke hearts, then add the milled flax seed and adjust the seasoning. Add a little more liquid smoke if necessary, if the flavour is not smoky enough.

(I didn’t have liquid smoke, which isn’t readily available in the UK, so I used smoked paprika instead, and added a touch of cayenne)

4. Transfer to a small bowl and refrigerate for an hour before serving.

For a more pronounced flavour of the sea, use a whole sheet of yaki nori.

Marie Laforêt’s beautiful book is (so far!) only published in French. Even if you don’t speak French, feast on the photos on her blog, 100% Végétal. 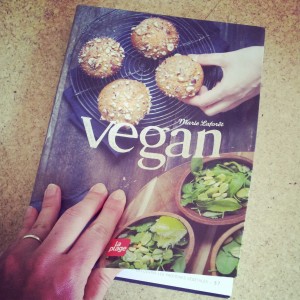