Notice: get_the_excerpt was called with an argument that is deprecated since version 2.3 with no alternative available. in /var/sites/e/enteringveganterritory.co.uk/public_html/wp-includes/functions.php on line 3739

Earlier this year I decided it was about time I treated myself to a new food processor.

As several people have asked me recently what I use, I thought I’d write about the one I eventually chose.

We did have a small hand-me-down food processor that still worked ok, but when I realised that switching to a 100% plant-based, vegan diet was going to mean cooking more from scratch, I decided I wanted something that would be able to handle everything I could throw at it.

As is my want, I spent hours researching the different brands, reading reviews and considering everything I might want to be able to use it for. In the end, I opted for this model – and it’s so much more than just a food processor.

Firstly, it’s a stand mixer, which isn’t a piece of equipment I’d ever owned before. To be perfectly honest, I probably still don’t use this as much as I could when making cakes because most of my vegan cake recipes are so super quick to make that I’m still in the habit of just quickly mixing them by hand. What I do use a lot though is the dough hook attachment that came included. When I’m making pizza, using the dough hook is like having another pair of hands.. the machine gets on with the kneading while I prep the toppings. If we want to make bread (and have forgotten to put a loaf of Nanna’s No-Knead Saucepan Bread on to rise), the dough hook does all the hard work for us, and all we need to do is take the kneaded dough out of the mixer bowl, plonk it in a loaf tin and pop it in the oven. It also does a great job on my flour tortillas. The bowl itself is stainless steel and feels solid without being too heavy.

The food processor attachment fits on to the top of the stand mixer, and I use it a lot. Firstly, I use it to grate carrot for my carrot-quinoa muffins or for a simple carrot salad – with the machine I can grate a big bowlful in moments that will keep in the fridge for a few days so it’s there ready when I need it. Secondly I use the thin slicer disc for slicing cucumber for cucumber salad or cabbage for coleslaw. Lastly I use the blade attachment for chopping nuts or making breadcrumbs, and for making strawberry-banana ice-cream or raw vegan protein brownies.

The model I bought also came with a blender that attaches to a high-speed outlet on the top of the stand mixer. This has been great for making smoothies. The blender jug is glass and it too feels beautifully solid, but it also comes apart when needed so that you can clean the blades thoroughly. So that’s three different items of kitchen equipment with a single shared footprint. It may feel like a lot of money to spend in one go, but because all three are driven by the same powerful motor, it seems to me that you’re getting much more bang for your buck than if you bought them as separate items.

Better still, there’s also an excellent juicer attachment available for the Kenwood Chef (oops, I let it slip – I’m talking about the Kenwood Chef Titanium KMC010) which we bought at the same time. This too fits to the top of the stand mixer when you want to use it and it’s brilliant – the feeder chute is big enough to take beetroot and apples whole, or perhaps cut in half if they’re big ones, the jug fills with juice and the pulp is collected into a container at the back. The whole thing comes apart for washing up, and it even comes with a little stiff-bristled brush that makes that bit easier. We’d never owned a juicer before but were inspired by watching the film Fat, Sick & Nearly Dead and I love it. I use it to make beetroot-berry juice and use that to make Pink Milk or my Pink Protein Shake, or I make a lush green chlorophyll kick vegetable juice for a super-healthy liquid lunch. I can’t recommend it enough.

Lastly, I also bought the mini-mill attachment. I thought I’d use this for grinding coffee but actually I use it most for grinding nuts to make a simple cashew parmesan for sprinkling on pasta – because it comes with spare glass jars and lids, I can whizz some up in the machine and then store the rest in the fridge with a lid on for next time. They’re also great for salad dressings and would be perfect for baby food.

So there you have it. I’m not going to spend ages wittering on about its 1400 watts of power or 4.6 litre mixer bowl, because you can read all of that stuff for yourself on Amazon. If you’re looking to buy a new food processor, stand mixer, blender or juicer, now you know what I use – and after being a proud owner for 3 months now I have no hesitation at all in recommending the Kenwood Chef Titanium KMC010. It’s already been worth every penny, and I’m satisfied that I can expect to be using it for years, perhaps even decades, to come. 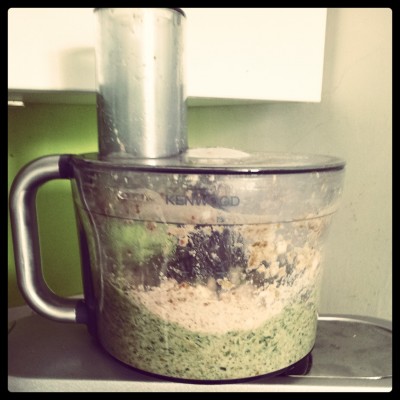 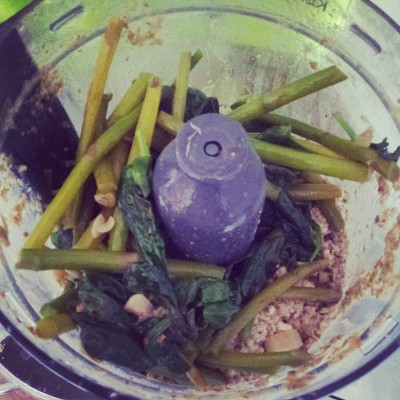